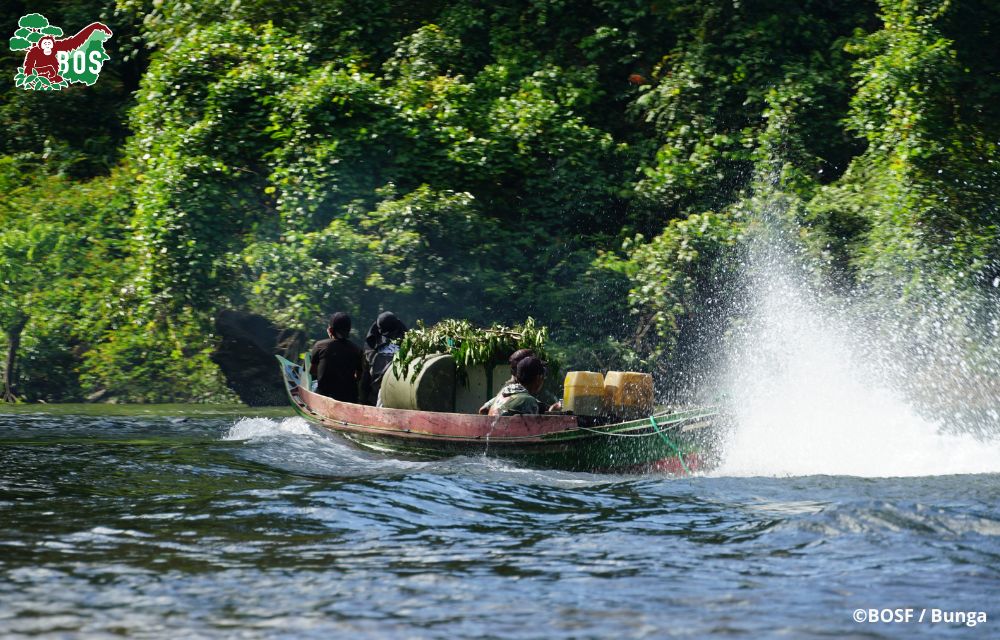 The BOS Foundation has successfully released 500 orangutans in the decade since the releases restarted in February 2012.

Our latest release journey began in the evening when swabs were used to collect samples from team members to ensure that nobody was infected with COVID-19. After a briefing from the program manager and release coordinator, the release team set off in groups, driving the three candidates for the 40th BOS Foundation release in Central Kalimantan to their final destination.

Our first stop was at Hiran Monitoring Camp, located near the Tumbang Hiran village, Marikit district. We arrived late at night and decided to stay over until the morning. The next day, we proceeded to the release point using five motorised boats. Moderate water levels made for a smooth ride on the river, with the morning sunshine lighting the way. One of the boats suffered from a leaking hull, which threatened to slow the journey down. However, the problem was easily fixed by our capable team.

The sun had moved westward by the time we reached the release point. Three orangutans – Lima, Gonzales, and Ben – were picked for the 40th release. All three had passed every stage of rehabilitation and possessed the survival skills necessary to live independently in the wild.

The first candidate was Gonzales, who was released prior to Lima and Ben in a different location. This was done intentionally to spread out the distribution of released orangutans. Shortly after his cage was opened, Gonzales climbed straight up into a tree to check out his new home from a higher vantage point. According to our technicians, Gonzales has a habit of walking on all fours and has a fairly broad cruising range. He ate some termites (Isoptera) and rattan (calameae) before finally making a nest to rest in at a height of approximately 15 metres off the ground.

The next orangutan released was Lima, a 13-year-old male, who climbed directly up into the trees once his cage was opened. Lima actively moved around and taste-tested meranti (shorea) leaves and orchid (orchidaceae) sap. Not long after he ate the orchid sap, Lima was heard letting out some long calls. Lima was also seen eating termites. Satisfied with his meal, Lima eventually made a nest in a meranti tree, about 15 metres off the ground.

The last – and the 500th orangutan released by the BOS Foundation – was Ben. The 12-year-old male was born at the BOS Foundation’s Nyaru Menteng Orangutan Rehabilitation Centre in 2010. As soon as his transport cage was opened, Ben exited and carefully studied his new environment. He tried to approach and chase Lima, showing that orangutans released in groups often socialise with each other before building up the confidence to move off on their own. After tiring of chasing Lima, Ben rested at the top of a meranti tree and snacked on some of its leaves. He then moved to a kapok (Ceiba pentandra) tree to eat its bark and was also observed eating termites. Ben actively moved around and eventually settled in a rasamala (Altingia excelsa) tree, where he constructed a nest at a height of about 15-20 metres from the ground.

Lima, Gonzales, and Ben were all highly active immediately following their release, thanks to the experiences they had gained from living on a pre-release island. While not aggressive individuals, all three had managed to sneak off of their respective pre-release islands and find their way to our technician camp. Clearly crafty and determined individuals, they had all proven that they were independent enough to go in search of their own food and live freely in the forest.

After witnessing how quickly the three orangutans were adjusting to their new home, the team returned to the Hiran Monitoring Camp. We hope that with the addition of these three individuals, they will contribute to a new generation of orangutans thriving in the forest.

Will you help us unlock more cages?