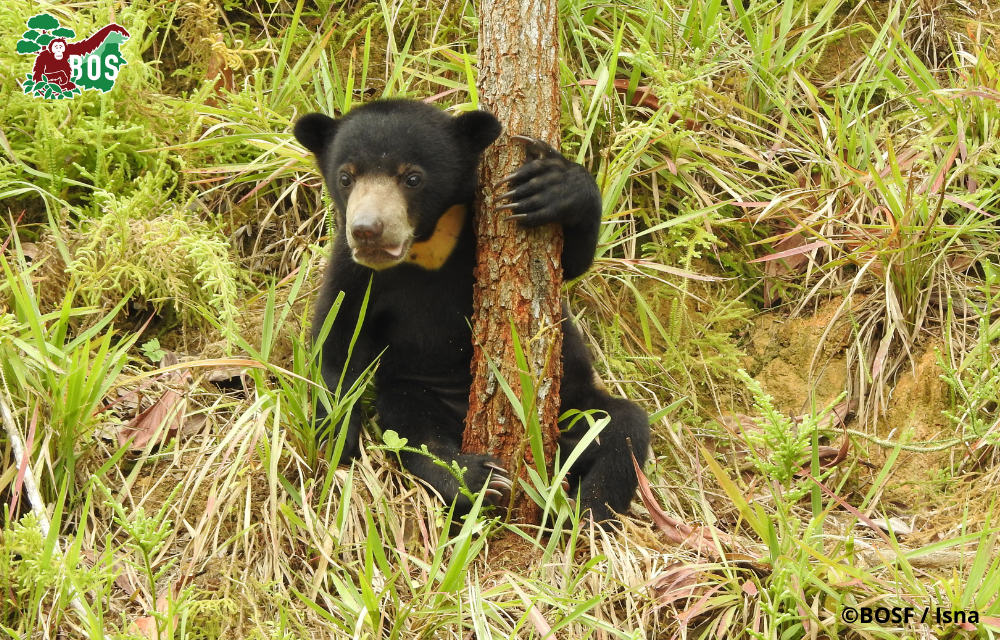 Adele is a female sun bear who was first discovered by employees of PT. Inhutani in Long Nah, East Kutai Regency. At the time of her rescue, she was only about a month old, with her eyes still closed. Adele, previously known as ‘Popo’, was cared for by the Tenggarong BKSDA team for three weeks before being transferred to the BOS Foundation’s Samboja Lestari Sun Bear Sanctuary. Adele can now see, although her vision is not perfect. Unfortunately, she also likes to bite!

When Adele first arrived, she was admitted to the orangutan care clinic, as we do not have special facilities for baby sun bears. She was taken care of by two surrogate mothers at night and one during the day. Upon her arrival, she was quite distressed and would only drink small amounts of milk.

In her first week at Samboja Lestari, Adele spent most of the time just sleeping. When she was awake, she would spend her time indoors, playing with cardboard boxes and towels. In the mornings and evenings, Adele played in the area next to the clinic, where there is grass, a playground, and trees. She liked to run around, chasing the surrogate mother and occasionally climbing. Slowly, Adele got used to sleeping in the outside cage, just behind the clinic. At first, she seemed scared, so she was still accompanied by a surrogate mother. However, she quickly got used to her new surroundings.

Adele was transferred from the orangutan clinic to the empty orangutan baby house when she was 2.5 months old because we currently lack sun bear cub care facilities. The purpose of this transfer was so that Adele could start the sun bear equivalent of forest school. She appeared to be very happy spending time in the forest, where she could search for and eat ants. She preferred to play on the ground than climb up into the trees. Sometimes, our staff had to accompany Adele by climbing themselves to encourage her to follow suit.

When she was seven months old, Adele was transferred to our Sun Bear Sanctuary, where she received training on how to keep away from electric fences. She was housed with another sun bear, Sulis, who was ten months old at the time. Spending time together in the socialisation cage, the two became very close. Adele and Sulis needed just five rounds of electric-fence training to grasp the concept before they were able to play safely in an enclosure together without supervision. Adele is now 11 months old and loves playing with her friend Sulis in the trees. She still occupies a training enclosure with Sulis, as we are awaiting the construction of a new enclosure that will allow her to join an age and personality-appropriate group of sun bears. As our Sun Bear Sanctuary does not have special facilities for infants under two years, Adele and Sulis must stay in the small-sized training enclosure until they reach two years of age. After that, they will be grouped with other sun bears.

Will you help us take care of the sun bears at Samboja Lestari?