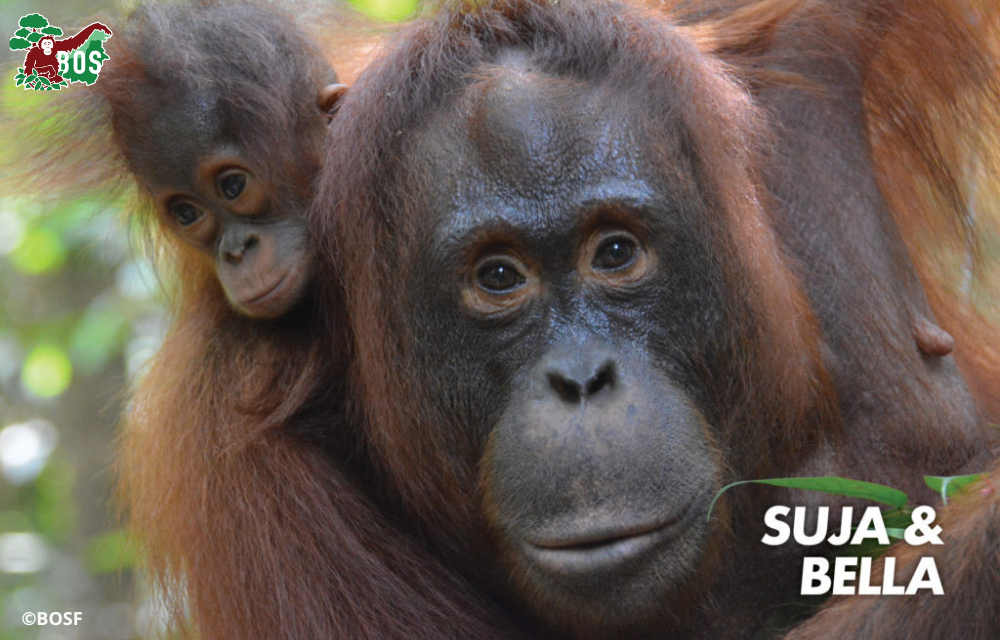 As BOS-UK is proud to present our upcoming premiere event of Eyes of the Orangutan, it’s an important time to look back on some of the orangutans who have been directly affected by modern wildlife tourism.

In 2006 at four years of age, Suja was repatriated from Thailand together with 47 other orangutans as part of a mass rescue from Safari World, where she had lived a life of cramped captivity, her freedom and her fellow orangutans’ freedom sacrificed for tourist photo ops.

She arrived at the Nyaru Menteng Orangutan Rehabilitation Centre on 22 November 2006, weighing only 14 kilograms. Seven years later, while still at Nyaru Menteng, Suja gave birth to her first child, who was named Syahrini. Tragically, Suja was unable to properly care for young Syahrini, and the two had to be separated. In the interest of what was best for the baby, Syahrini was raised by a human surrogate mother.

Years later, on 5 April 2017, Suja was transferred to Salat Island. On the pre-release island, Suja further developed her natural skills, and on 18 February 2019, she gave birth to her second child, Bella. This time, being a little bit more prepared, Suja was ready for motherhood and took great care of her baby.

Possessing a gentle spirit, Suja was always friendly toward her caregivers, and she tended to avoid competition with other orangutans on the island by keeping herself busy with her explorations.

Then, on 15 December 2019, Suja and Bella completed their long rehabilitation process and were ready to be released into their natural habitat in Bukit Baka Bukit Raya National Park (TNBBBR). Their release transport consisted of a 20-hour road trip, including a night stopover in Tumbang Melawan village before the journey continued by boat to the release site.

It was a long road to full rehabilitation for Suja, but she learned to thrive in her wild and free state. And her baby Bella, born during her pre-release, never has to know a life of captivity.

It’s stories like these that have fueled the Eyes of the Orangutan documentary.

From the studio that brought you Ivory Game and Sea of Shadows comes a new and powerful documentary, Eyes of the Orangutan. A captivating exploration of one of the most troubling facets of modern wildlife tourism, and an uplifting celebration of one of our closest living relatives: the orangutan.

For the first time ever, you can watch this incredible documentary in one of London’s most charming and iconic venues, the Royal Geographical Society. We invite you to join us on 19.01.2023 for this premiere event – it’s because of you that orangutans like Suja get their second chances.

Get your TICKETS for EYES OF THE ORANGUTAN now!

Or, if you can’t make it to London, please support our WILDLIFETRADE PLEDGE to bring this cruel industry to an end!