WE CARE FOR SUN BEARS 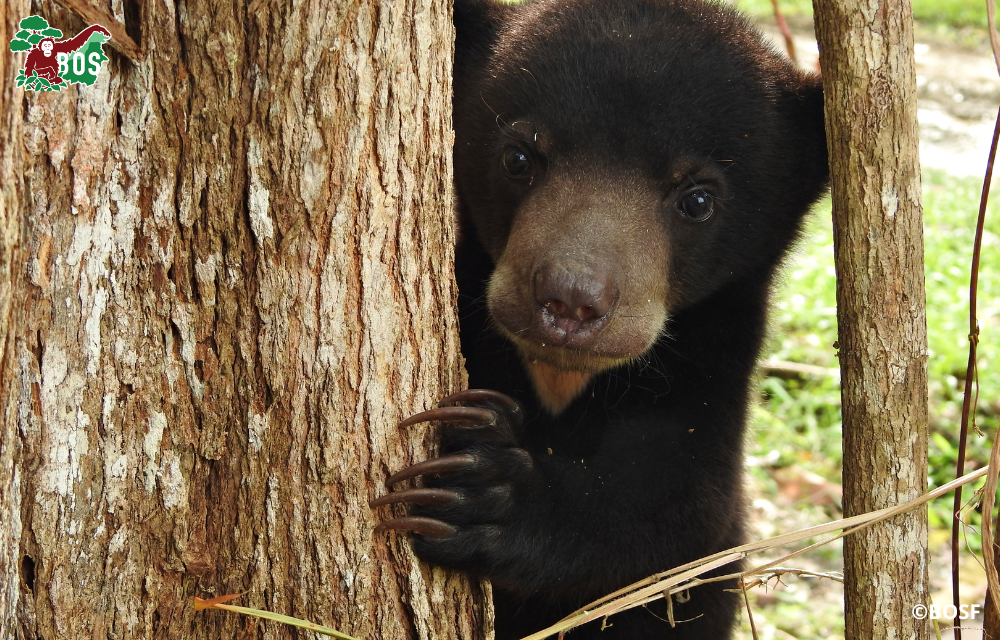 The sun bear (Helarctos malayanus) is the smallest of the eight bear species in the world. Sun bears are included in the Red List of Threatened Species, as reported by the International Union for Conservation of Nature (IUCN), which has also implemented the Sun Bear Conservation Action Plan (2019-2028) to help save the species from extinction.

Sun bears face many threats: Their habitat is being destroyed by persistent forest clearing. They are hunted as pests and a commodity for the illegal animal trade, with an ongoing demand for their body parts and baby bears as pets.

The sun bears require lifetime sanctuary care, just like many orangutans in our care at Samboja Lestari. Therefore, we apply the same animal welfare principles and implement training programs to help physically rehabilitate them. When left undisturbed in the wild, sun bears start learning survival skills from their mothers from the time they can see, walk, smell, and hear at around five months of age. Our sun bear training incorporates:

Target training involves teaching sun bears to follow a target on a stick that directs them to move from place to place in a safe and relaxed manner.

This type of training is repeated so that sun bears learn to follow the direction of the target readily. Sun bears are given a break from the training session if they begin to display aggressive behaviour; the technician will stop and wait until the bear has calmed down.

This training is undertaken in 10 to 20-minute sessions, repeated three to five times per week until the bear understands fully. The duration of this training should not be too long to avoid the bears becoming bored or frustrated.

The goal is to make it easier for the bears and technicians when move in and out of enclosures. For example, when the enclosures require cleaning or when the bears need to be relocated.

Stage 1: Moving sun bears out of cages and into small forest enclosures. The bears then discover the food that has been placed inside. This stage is conducted with the electric fences turned off and is supervised by three technicians around the enclosure. The technicians will clap loudly when a bear gets too close to the electric fence to avoid them making contact with the wire.

Stage 2: This stage is carried out using the same protocols as Stage 1, but with the electric fences turned on.

Stage 3: When a sun bear has recognised the electric fence and has not approached or touched it, then the bear can be moved to a larger enclosure.

Each electric fence training session lasts 15 to 30 minutes and only fails if the sun bear touches the electric wire (6 volt DC, 3/1 second). Sometimes, if a bear touches the wire, they refuse to enter the enclosure again. If this happens, we give the bear time to rest and only restart the training again from Stage 1 when they are ready.

This particular training is conducted by technicians, who encourage sun bears to enter transportation cages voluntarily. Transport cages are used to move sun bears from one enclosure to another or different locations. Sun bears also need to be transported in cages when they must be moved to the clinic for a full medical examination. By training the sun bears to enter transport cages voluntarily, we can avoid using anaesthetics. The stages for this training include:

Stage 1: Introduce the transportation cage to the sun bear by placing it close to the door of their enclosure for three days, so the sun bear gets used to this foreign object.

Stage 3: Encourage the sun bear to stay in the transportation cage for short periods.

Stage 4: Have the sun bear enter the cage while supervised by four technicians who also gently handle the cage.

Stage 5: Normalise the closing of the transport cage’s door.

Stage 6: Allowing the sun bear to grow accustomed to being lifted in the cage.

Stage 7: Slowly start to move the cage with the sun bear inside.

This training is quite time-consuming, with the fastest a sun bear ever completing the process taking about a month with ten training sessions.

All of the training we do with sun bears adheres to the principle of positive reinforcement: desired behaviour is reinforced through rewards and does not involve violence or punishment. When a sun bear successfully passes each training stage, they are rewarded with fruit, honey, or other favourite foods.

These training activities are by no means intended to serve as a form of entertainment or for human interests. Instead, all are designed to better animal welfare and based on best-practice management.

We currently care for 72 sun bears at the Sun Bear Sanctuary at Samboja Lestari, East Kalimantan. We hope that the training we provide for the sun bears helps them live happy and peaceful lives.

If you would like to support our work, please consider a donation. Thanks so much!