Britney was seven years old when she was rescued from captivity in Bali in June 2000. Upon arrival at Samboja Lestari, Britney was housed inside a socialisation complex because she was physically large for her age and extremely aggressive towards the staff.

To this day, Britney is a stocky orangutan with an indifferent nature, and is extremely difficult to handle. She will completely ignore technicians when they try to get her attention, unless there is a reward involved.

In 2019, Britney was moved to Island #7 to experience the pre-release stage of rehabilitation. During her time on the island, Britney further developed her foraging and nest-building skills and proved she had what it takes to survive independent of humans.

Freet was rescued in August 1998, from a local villager in Muara Wahau who had been keeping him captive. He was four years old at the time and still displaying wild behaviours. Upon his arrival at Samboja Lestari, Freet was diagnosed with Hepatitis B, and had to be placed in a quarantine complex specially designed for orangutans with this health condition. Even within the confines of the complex, Freet came to be known as a responsive individual, especially with the technicians with whom he was familiar.

Once we learned that Freet had a non-virulent strain of orangutan Hepatitis B, he was finally able to enter the pre-release stage of rehabilitation on Island #7. On the island, he managed to further develop his foraging and nest-building skills.

Freet is now 27 years old and weighs 73 kg. He has been assessed as ready to live in the wild and will soon get the chance to prove his abilities in the Kehje Sewen Forest.

Juve was confiscated in Jakarta and arrived at Samboja Lestari in March 2001, aged five years. Juve is an independent and aloof individual but will become aggressive if technicians get too close to him, and he shows signs of irritation when he is called by name.

In 2018, Juve got the opportunity to join the pre-release stage of rehabilitation on Island #7, where he managed to develop sound foraging and nest-building skills.

Now 25 years old and weighing 76 kg, Juve is ready to live free and independently in the wilderness of the Kehje Sewen Forest.

Select image to expand their bio 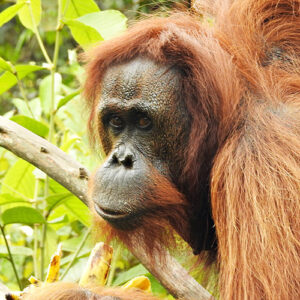 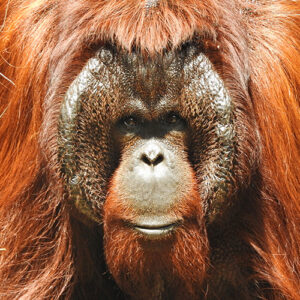 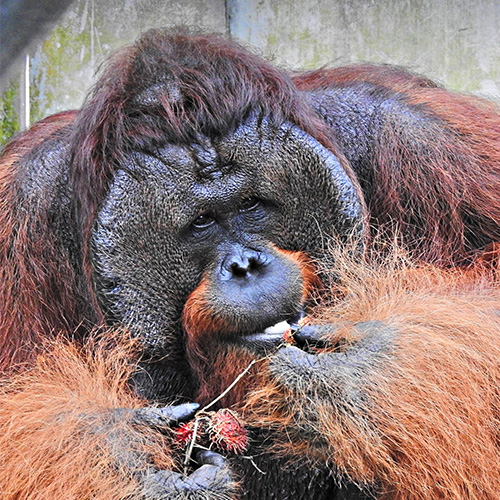 After the successful release of Freet, Juve, and Britney on 18 February, our Post-Release Monitoring (PRM) team from Lesik Camp in the Kehje Sewen Forest of East Kalimantan, has found renewed vigour! The global pandemic had forced us to temporarily suspend a few activities over the past 12 months, including orangutan releases. Thus, it was an exciting moment when we were finally be able to release these three orangutans in the wild. 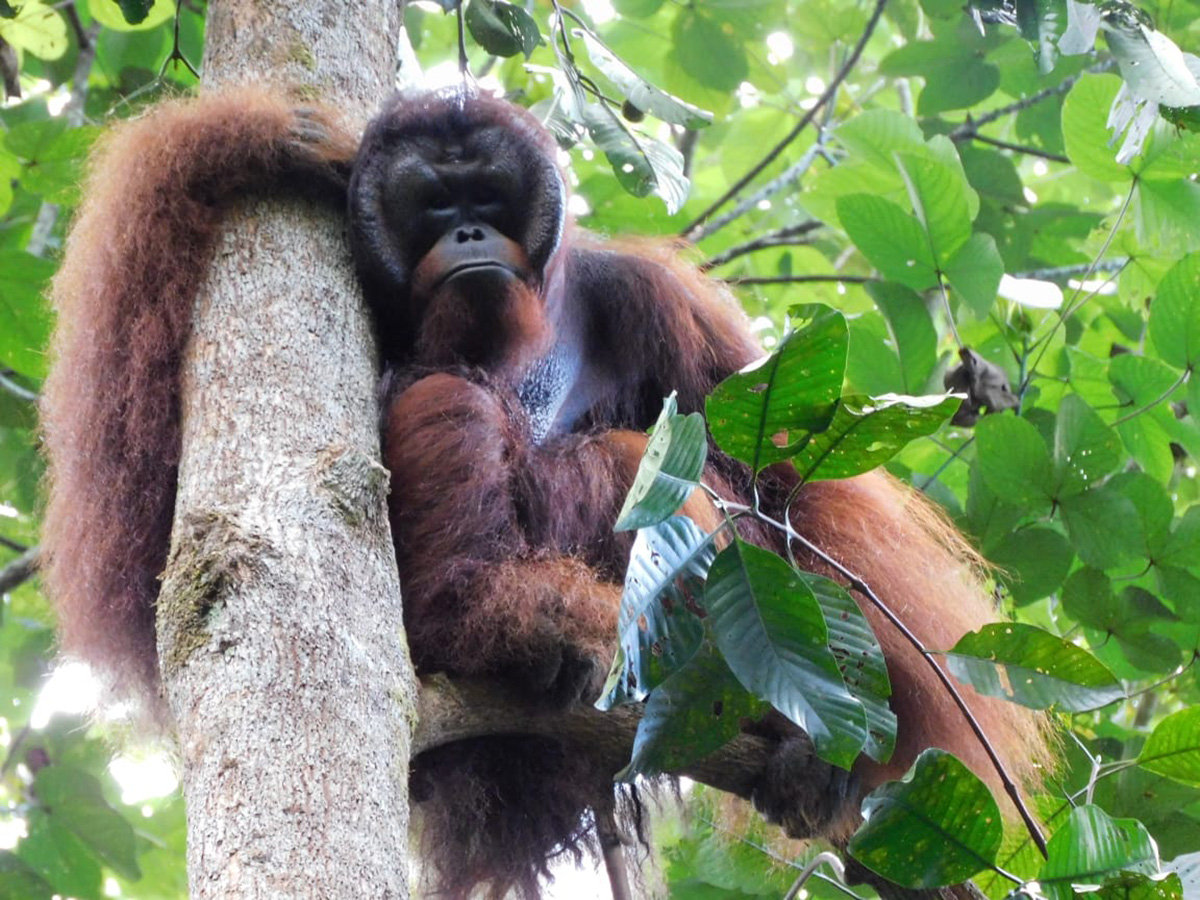 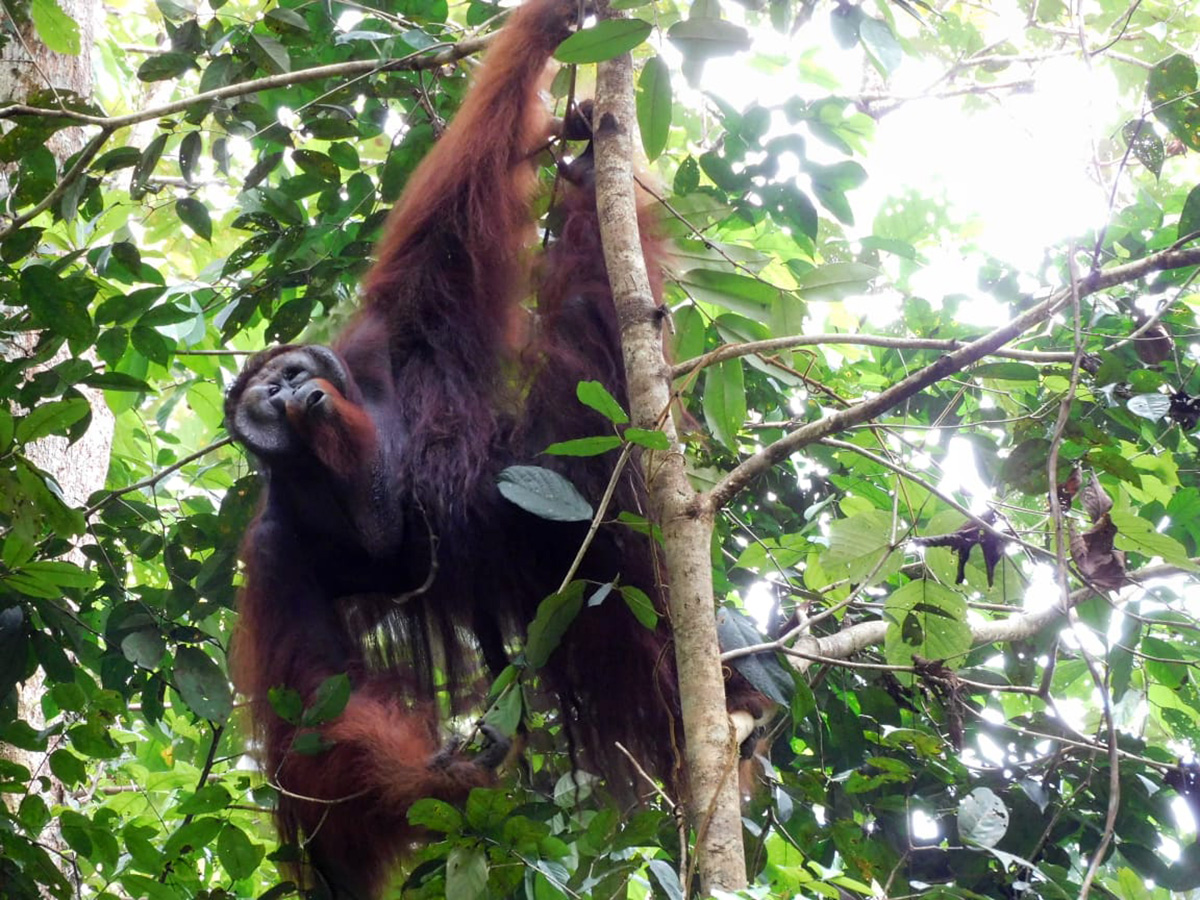 The newly released adult orangutans included males Freet and Juve, aged 27 and 25 years old respectively, and female Britney, 28 years old. Mature in age and equipped with all the skills required to survive in the wild, the three orangutans instantly began to explore their new surroundings. Our PRM team, which is responsible for monitoring released orangutans once the transport cages are opened, unfortunately lost track of Freet and Britney after the two quickly brachiated away in the tall canopy. The team, left behind on the forest floor, kept up with Juve and managed to monitor him all afternoon until he had built his night nest.

That afternoon, our team noticed that Juve stayed in the very top of the canopy, where he enjoyed adinandra leaves and fruits. He was obviously hungry after his long journey to the forest and wasted no time in satisfying his appetite. Once Juve had filled his belly, he began looking for branches to build his first nest in the Kehje Sewen Forest. What a milestone for him! Once he was settled, our team returned to the temporary camp to rest. 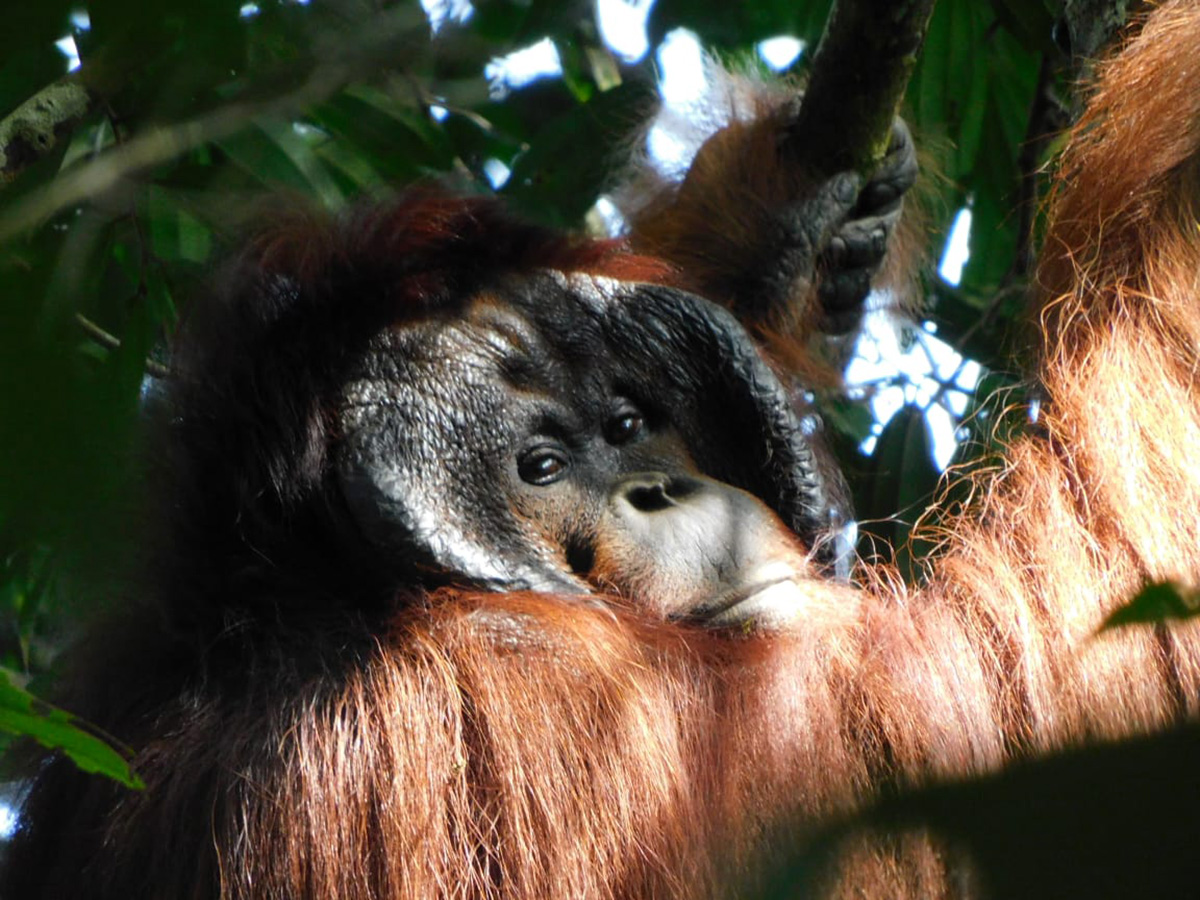 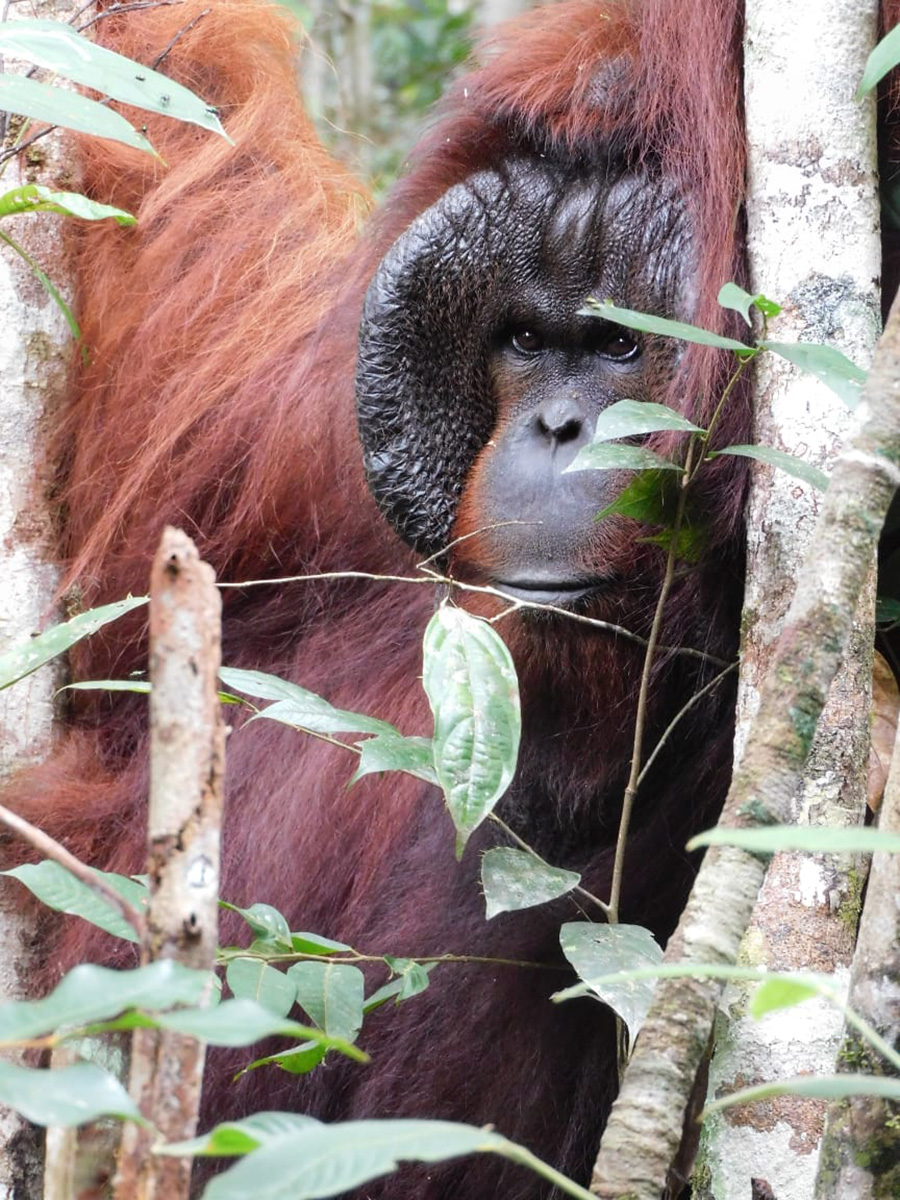 The next morning, three teams were sent out to monitor Juve, Freet, and Britney. Finding Juve was not difficult, as we knew where to locate him in his night nest. During that day’s observations, Juve again showed excellent foraging skills, judging from the variety of fruits and leaves he consumed.

During the day, Juve let out a long call, which could be heard by the team that had found Freet and was observing him. Freet was located not far from where he was released. During observations, he showed his displeasure at being observed by our PRM team members by breaking tree branches and throwing them at the team below. Freet was seen heartily eating Nephelium sp., or forest rambutan.

At first, Freet did not seem to pay attention to Juve’s long call. But after a while, he responded with a mutually loud long call. This shouting contest occurred into the afternoon, just before the two settled down to build their night nests. That day, we also heard another orangutan long call coming from the east. 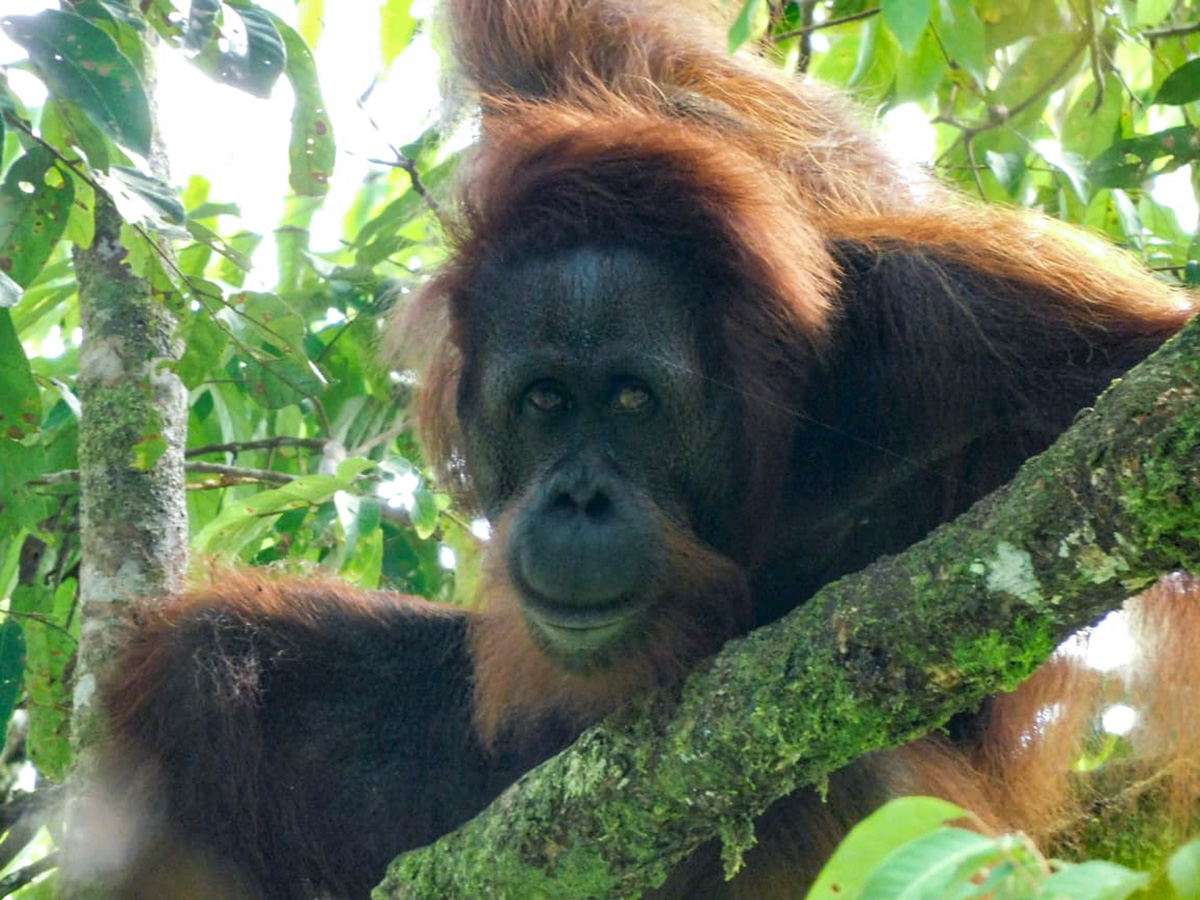 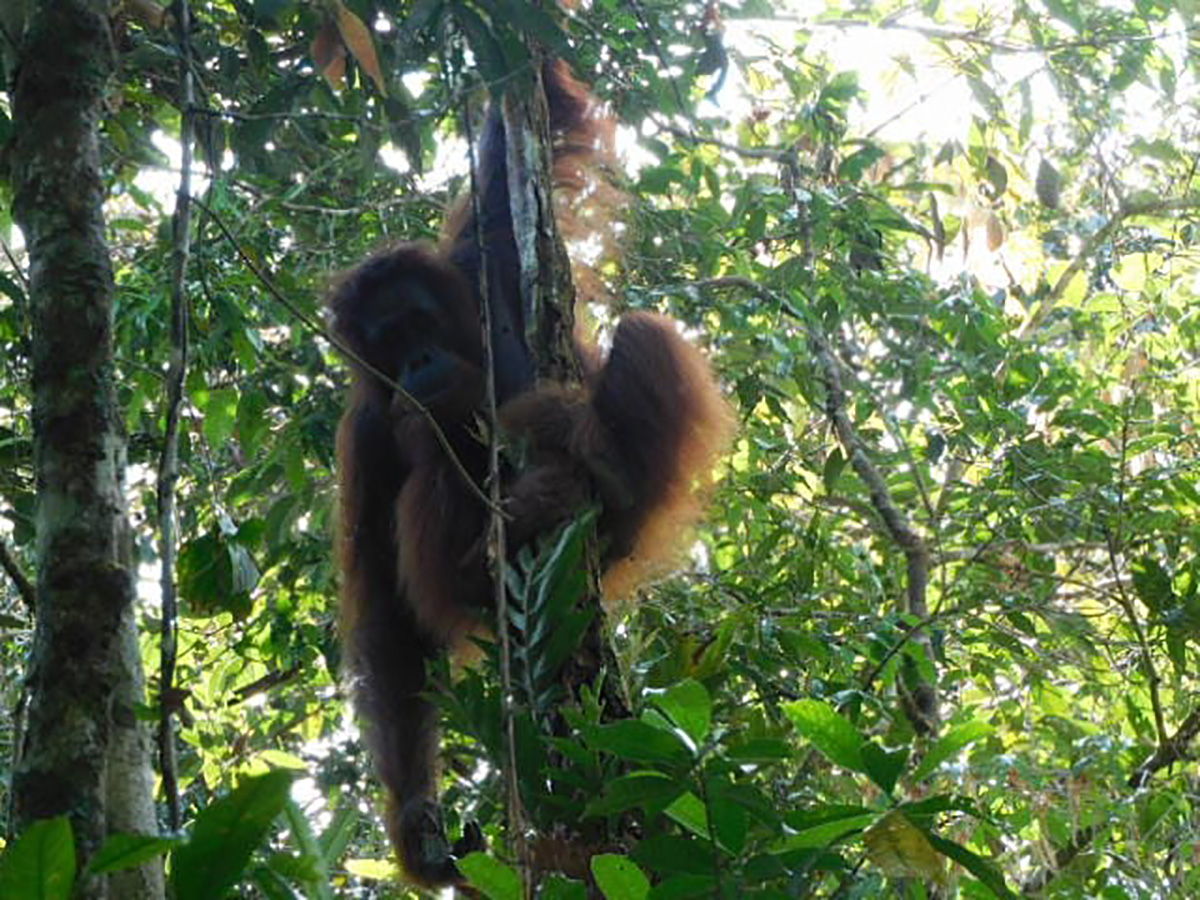 The next day, one of our teams finally located Britney, who was seen approaching Juve. As the two became comfortable with each other’s presence, Juve began to follow Britney wherever she went. However, after a short while, he gave up and wandered off to explore the forest alone.

You can view the release here
← Previous Update Next Update →
Back to ORANGUTAN FREEDOM
Please donate now to help
Add your voice, donate now