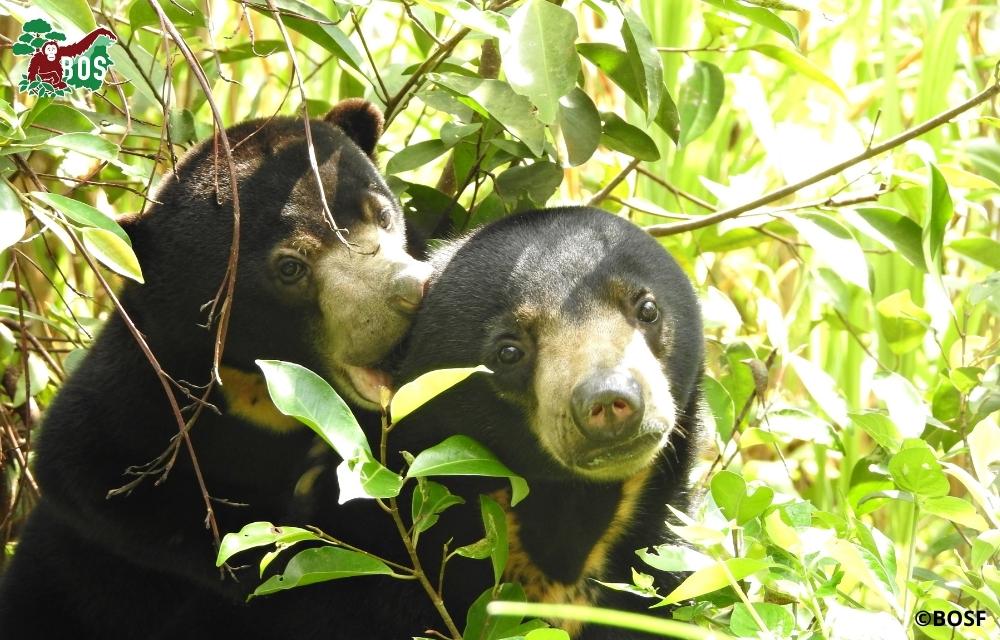 Do you want to know more about the world’s smallest bears? Look no further!

WHY IS AN ORANGUTAN CONSERVATION ORGANISATION CARING FOR SUN BEARS?

As a vulnerable species threatened with extinction, sun bears in Borneo need organisations that care for those displaced and champion their cause. Unfortunately, in Kalimantan, these are limited in number and resources. So, in 1997, when the Indonesian government asked for us to help with one bear, we could not say no. The plan was always to find a more suitable home for the bears, as we were experts in orangutan care, completely new to sun bears. But we could never find a reliable organisation to take on these bears, and the number of bears in our care continued to rise. Today, we do all we can to offer a high quality of life for the bears in our care, but we are not actively rescuing sun bears or expanding the program.

HOW LONG DO SUN BEARS LIVE?

While sun bears have been recorded living up to 30 years old in captivity, their average lifespan is estimated to be around 25 years old. For wild sun bears, there is a lack of data and knowledge on exactly how long they live.

HOW MANY CUBS WILL A FEMALE SUN BEAR HAVE, AND HOW LONG DOES SHE CARE FOR THEM?

Typically, mother sun bears can give birth to one or two cubs at a time. They are blind and completely dependent on their mother for care and sustenance when they are born. It takes about four weeks for their eyes to open fully, but even then, they will stay with their mom until they are two to three years old.

WHAT IS THAT LIGHT PATCH OF FUR ON THEIR CHEST?

That is their chest mark! Like human fingerprints, no two chest marks are the same, so they serve as an easy way to tell individual bears apart.

WHY ARE SUN BEARS HUNTED FOR THEIR GALLBLADDERS?

The bile in the gallbladder has been used in traditional Chinese medicine since the 7th century, at least according to the written record. Despite evidence supporting the effectiveness of synthetic bile as a substitute and the prohibition of trade in bear parts, the illegal trade and farming of sun, moon, and brown bears persist. This is partly due to the low level of legal enforcement not offsetting the incentive of large profits as the price of a single gallbladder has been recorded as high as USD 2,000.

WHAT DOES THE FUTURE HOLD FOR THE SUN BEARS AT SAMBOJA LESTARI?

Sun bears are notoriously difficult to rehabilitate and reintroduce to the wild. The investment is incredibly high in time and staffing, and the success rate is incredibly low. It would be cruel and unfair for adult bears to release them, so instead, we provide them with permanent sanctuary care. If a cub is rescued, there is a slight chance we can return them to the wild, but we do not currently have the infrastructure to support the process. As the IUCN currently recommends that release guidelines for sun bears be amended pending further research, we are not presently looking to expand our program beyond sanctuary care.

HOW CAN I HELP SUN BEARS?

As a forest-dependent species, much of the decline in sun bear populations is linked to deforestation. So, just like with orangutans, you can support sun bears by being conscientious about your decisions as a consumer. Be sure that your favourite products are not the result of irresponsible agricultural processes which exploit local people and clear forests. Also, do what you can to stop the spread of misinformation on social media regarding the use of sun bear parts and bile as medicine, which research shows can be replaced by synthetic bile [Li et al., 2016 – Substitutes for Bear Bile for the Treatment of Liver Diseases: Research Progress and Future Perspective].

IS THERE A WAY I CAN VISIT THE SUN BEARS?

You can visit our Samboja Lodge and not just take a sneak peek at our Sun Bear Sanctuary, but also connect with nature, rejuvenate your body and soul – and watch our rescued orangutans roam freely on specially designed sanctuary islands.

Find out more about our Rainforest Yoga Retreat.