Amber was surrendered by an oil palm plantation employee on 11 May 2006, weighing only two kilograms at the tender age of six months.

Following quarantine, Amber began her rehabilitation journey in Forest School and in a matter of years graduated from this first step of the long process. She advanced to a pre-release island when she was moved to the Salat Island Cluster on 17 December 2019. While on the island, Amber loved to explore, and she learned to build sound nests. Amber is not aggressive, and she gets along well with other orangutans, specifically, Barlian, with whom she has formed a friendship.

Barlian was allegedly found by a plantation employee on the side of a road, near a small forest alongside an oil palm plantation block of PT. MSAL, in Central Kalimantan. He was reported alone and in a weak condition. He was handed over to authorities on 20 June 2013, after being kept by a villager for two weeks. He arrived at Nyaru Menteng aged two years and weighing 4.1 kilograms.

After completing Forest School, Barlian proceeded to the pre-release stage of rehabilitation in the Salat Island Cluster, beginning on 17 December 2019. He was taken to the island with his best friend, Amber. Barlian spent most of his time in tall trees and paid little attention to the humans below. While not a dominant orangutan, Barlian is still able to fend for himself when needed.

Darryl was surrendered by a resident of Sampit on 11 July 2010. The resident had allegedly purchased the male baby from a person in Bali, however, after one week of caring for the baby had decided to hand him over to the Central Kalimantan BKSDA. At the time, Darryl weighed only 2.4 kilograms and was estimated to be around six months old.

After completing Forest School, Darryl underwent the pre-release stage of rehabilitation in the Salat Island Cluster, starting on 17 December 2019, alongside friends Amber and Barlian. He has explored all over the island and is skilled at brachiating and climbing trees. He has honed his foraging skills to identify edible forest fruits on the island, an important skill that will help him survive and thrive when he is released to the wild.

Reren was once held captive by a resident of Jabiren, who claimed to have found her crawling alone on a rice field embankment near the Kahayan River. At the time, 100 hectares of forest had just been cleared in the area for agricultural purposes, with plans for another 150 hectares to be cleared to create a 250-ha oil palm plantation. Through a joint operation by the BKSDA wildlife rescue team and the BOS Foundation, Reren was rescued on 17 July 2014, aged 12 months and weighing three kilograms.

After completing all stages of Forest School, Reren progressed to the pre-release stage of rehabilitation in the Salat Island Cluster on 7 November 2019. This charming female is gentle and was frequently spotted socialising with other orangutans. She can build sound nests and spends most of her time up in the trees. An active explorer, Reren usually ignores humans when they are observing her.

Suayap was repatriated from Thailand and arrived at Nyaru Menteng on 22 November 2006. She was estimated to be about six years old and weighed 23 kilograms. It was due to her advanced age for the rehabilitation process and her behaviour that she was unable to enter normal Forest School.

After a period of quarantine, Suayap started skill lessons in a special Forest School group for young, repatriated orangutans. She ‘graduated’ from this program in 2010, and Suayap was finally given the opportunity to proceed to the pre-release stage of rehabilitation in the Salat Island Cluster on 26 June 2019. While not aggressive by nature, Suayap is still capable of standing up for herself when needed. She actively explores her surroundings, forages well, and excels in acting appropriately for an orangutan no matter the circumstances.

Suayap is now 22 years old and, after completing 16.5 years of rehabilitation, is ready to start a new life in the forest of the Bukit Baka Bukit Raya National Park.

Randy was rescued from captivity in a joint operation by the BKSDA wildlife rescue team and the BOS Foundation on 16 June 2007. When he arrived at Nyaru Menteng, Randy was estimated to be about five months old and weighed three kilograms.

After successfully completing all stages of Forest School, Randy continued his rehabilitation journey on a pre-release island in the Salat Island Cluster, starting on 29 January 2020. Randy cares little for human presence but gets along well with other orangutans. He has actively explored the forested island and spent most of his time brachiating in tall trees while foraging.

Unggang was surrendered by a resident of Karya Unggang Village on 17 December 2014. He arrived in poor condition, with burn marks on his hands, feet, and part of his face; leading us to conclude that he was a victim of a forest fire. Before being handed over, Unggang was kept in a chicken coop for several days. Upon arrival at Nyaru Menteng, he was estimated to be about three years old, and he weighed 6.5 kilograms.

After successfully completing Forest School, Unggang continued to learn on the pre-release island of the Salat Island Cluster. On the island, Unggang avoided humans, exploring his surroundings, and foraging for natural foods. He also actively moved through the trees and built strong, neat nests.

In collaboration to release seven orangutans into prime habitat

The first stage of the 180-kilometre release journey took several hours to complete by road. As per our SOP, periodic stops were made along the way – every two hours – to check on the orangutans in their transport cages. These stops were purposefully made in quiet areas to minimise the possibility of meeting local residents, in an effort to help curb the spread of COVID-19. We also made the conscious effort to depart from the Nyaru Menteng Orangutan Rehabilitation Centre at night, to reduce contact with others. As a result, our pitstops were uninterrupted throughout the journey. 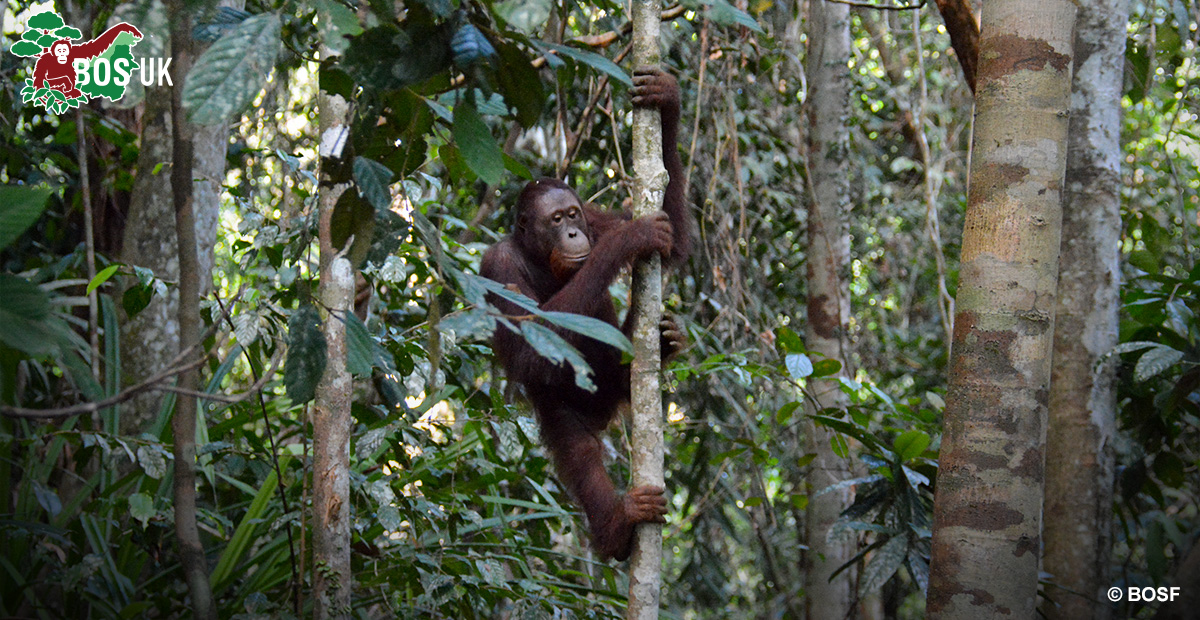 The road travel ended in Tumbang Hiran, a small town, where our team rested, just after midnight. Early the next morning, the team continued the journey on motorised longboats, or kelotok, along the Katingan River. About two hours later, the team headed into the Bemban River and travelled upstream to the Bemban watershed, in a 7-hour ride.

Around 2 p.m., the team and the seven orangutans arrived at the release points located near the banks of the Bemban River, deep in the forest of the TNBBBR. The orangutans were released one after another, with the post-release monitoring (PRM) team standing by to take over monitoring of the orangutans as they adjusted to life in this new environment.

The following are the results of observations on day one: 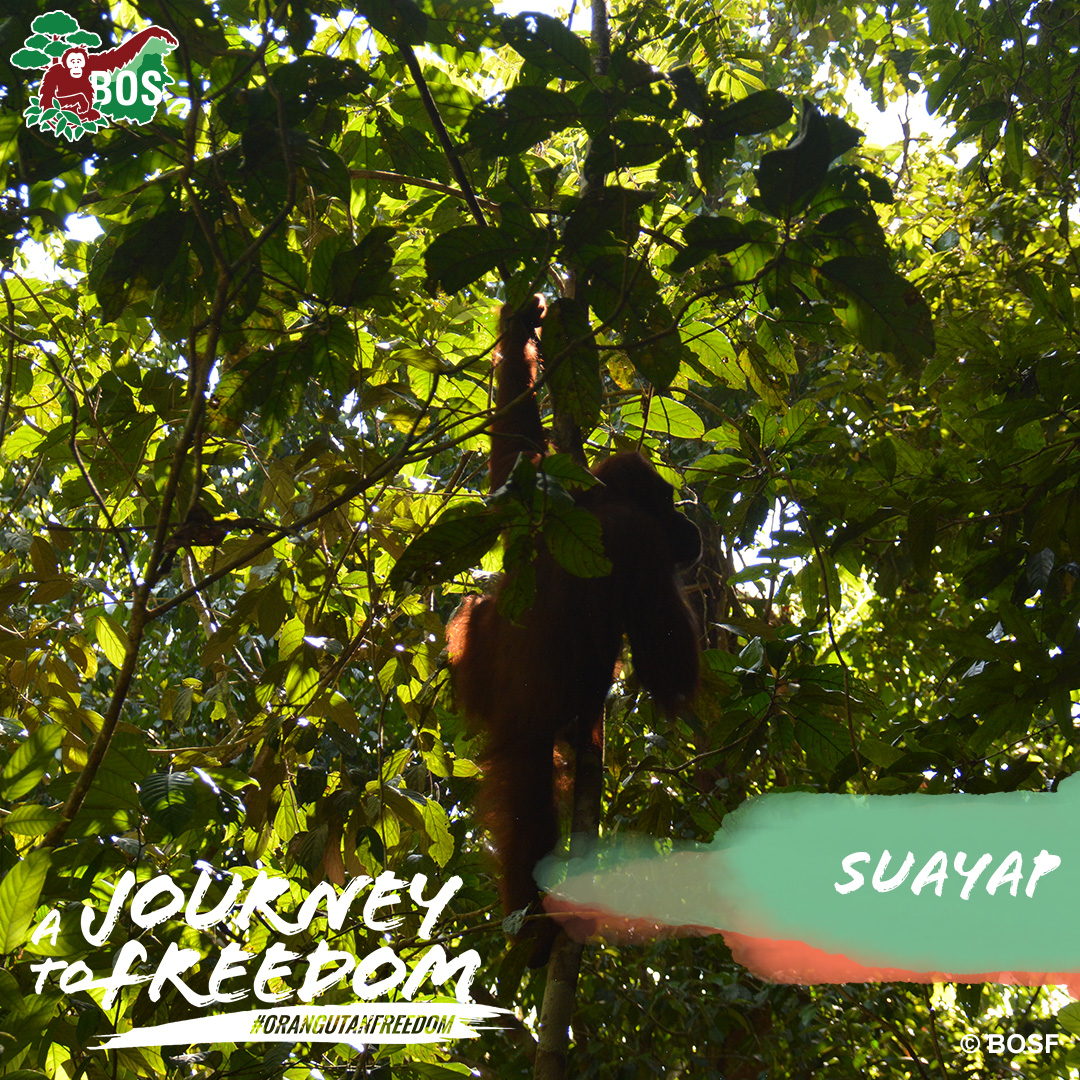 Once her cage was opened, Suayap enthusiastically climbed up a nearby tree and ignored the activities going on around her as the release team prepared to open another cage. Suayap, who was repatriated from Thailand in 2006, seemed to recognise the many types of natural food around her. She ate mahawai leaves, forest mangosteen and figs, and even termites. She was observed making efforts to approach Barlian and an unidentified orangutan, but did not interact with them.

As soon as the day began to turn dark, Suayap started building her evening nest up in a tree about 25 metres off the ground, not far from where she was released. 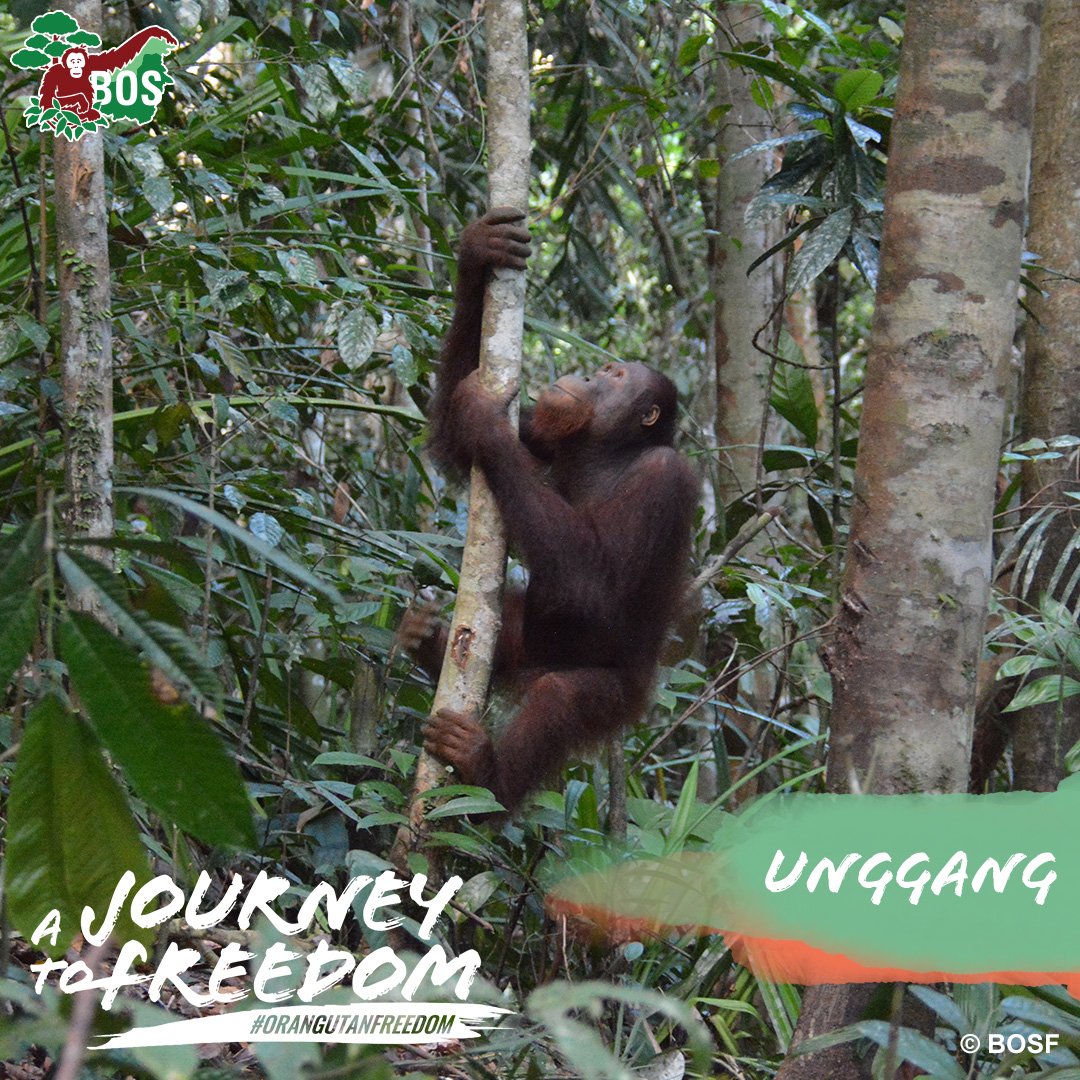 Unggang climbed up a kapening tree after he was released. It took him quite a while to enjoy all the fruits around him. He was seen eating natural foods such as tunding ondang fruit, kempas cambium, and termites.

Unggang also built his night nest as soon as the day turned dark, up in a tree at around 30 metres off the ground and about 100 metres away from his release point. 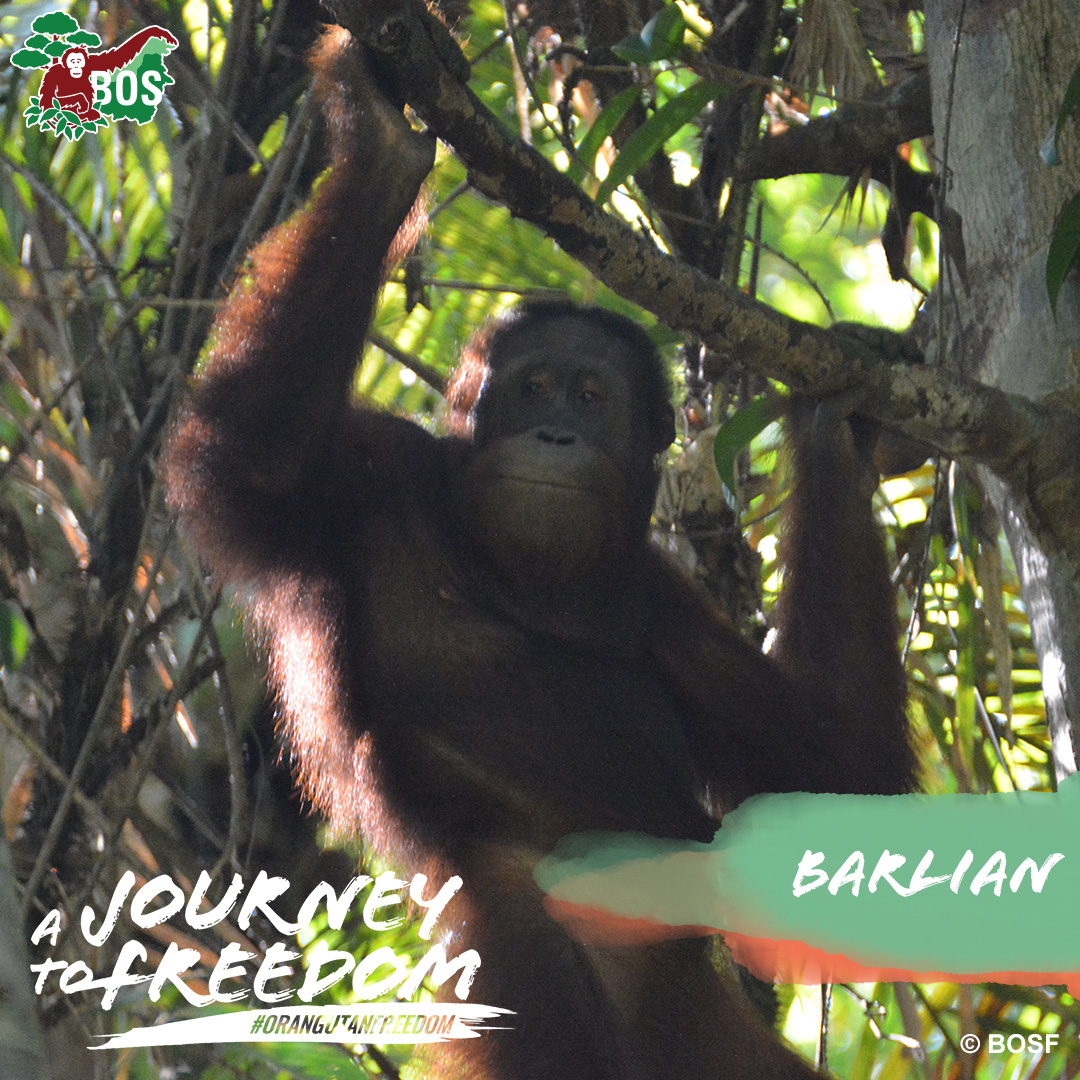 Unlike the other orangutans, Barlian needed more time to observe his new surroundings after his cage was opened. He walked along the ground for about 10 metres before climbing up a tree.

Once Barlian was up in the trees, he approached Suayap, who was released before him. While the two were spending time together, an unidentified orangutan came by. Barlian wrestled with this orangutan! It seemed that the 20-hour journey had not exhausted Barlian, as he managed to outmuscle the unidentified orangutan. He even tried to give chase when his challenger fled! In the end, Barlian opted to let the orangutan flee rather than keep up the chase.

Barlian also met with Unggang. At first, the two vocalised towards one another, but later became friendly and were seen eating together in a tapening tree. They were observed consuming mahawai, lunuk, diwung, and pilang fruits. Barlian chose to repair a used nest he found nearby for his night nest, around 20 metres off the ground and about 100 metres from his release point. 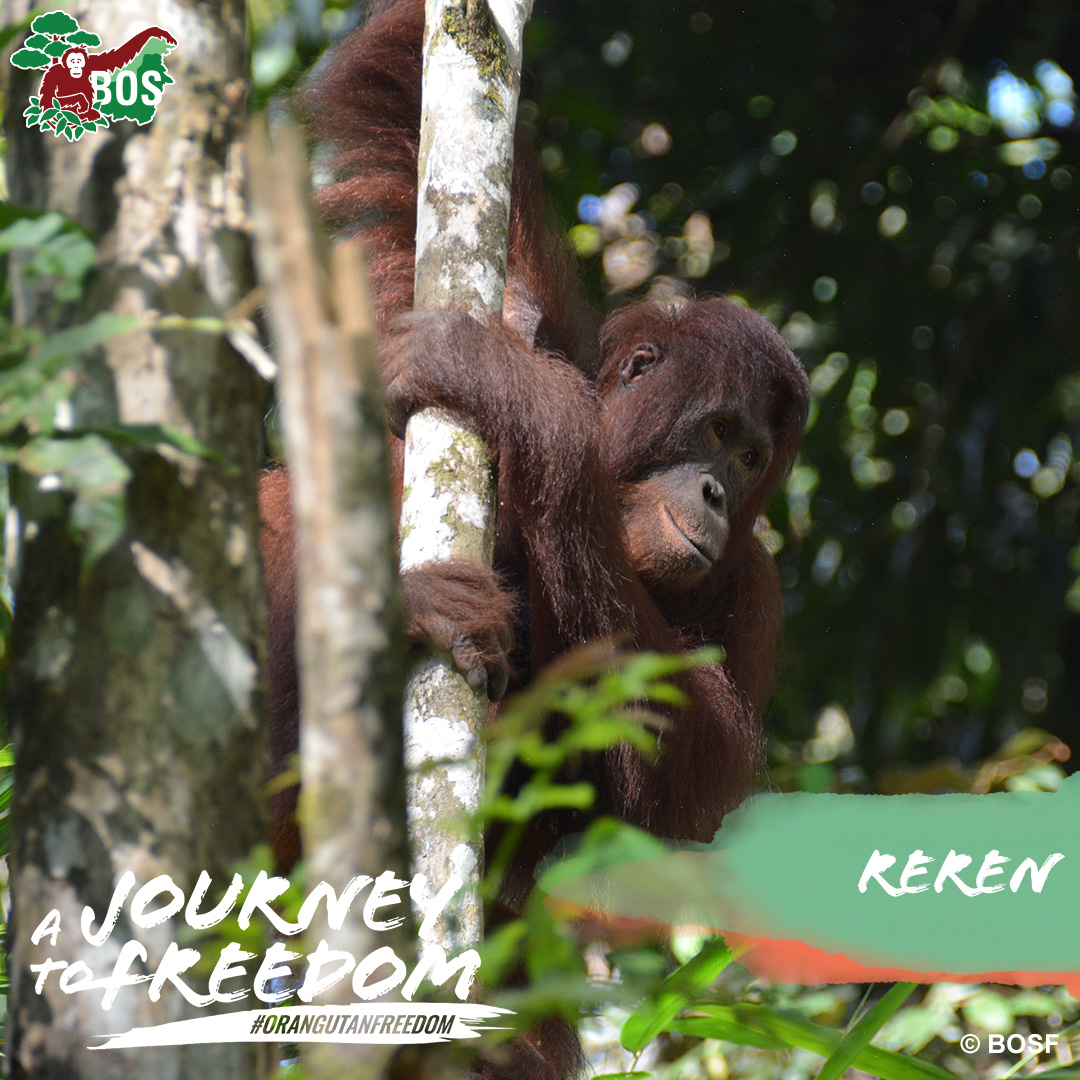 Reren was released alongside Darryl, Amber, and Randy. At the start of observations, the four orangutans were seen interacting and foraging alongside one another. Reren was observed picking on Amber, but there was no aggressive behaviour between them.

Reren was active and ate a lot of forest food, including kondang and figs, wild ginger piths, and ferns. She built her nest close to Amber’s nest, a bit far from the point where both of their cages were opened, around 250 metres away. 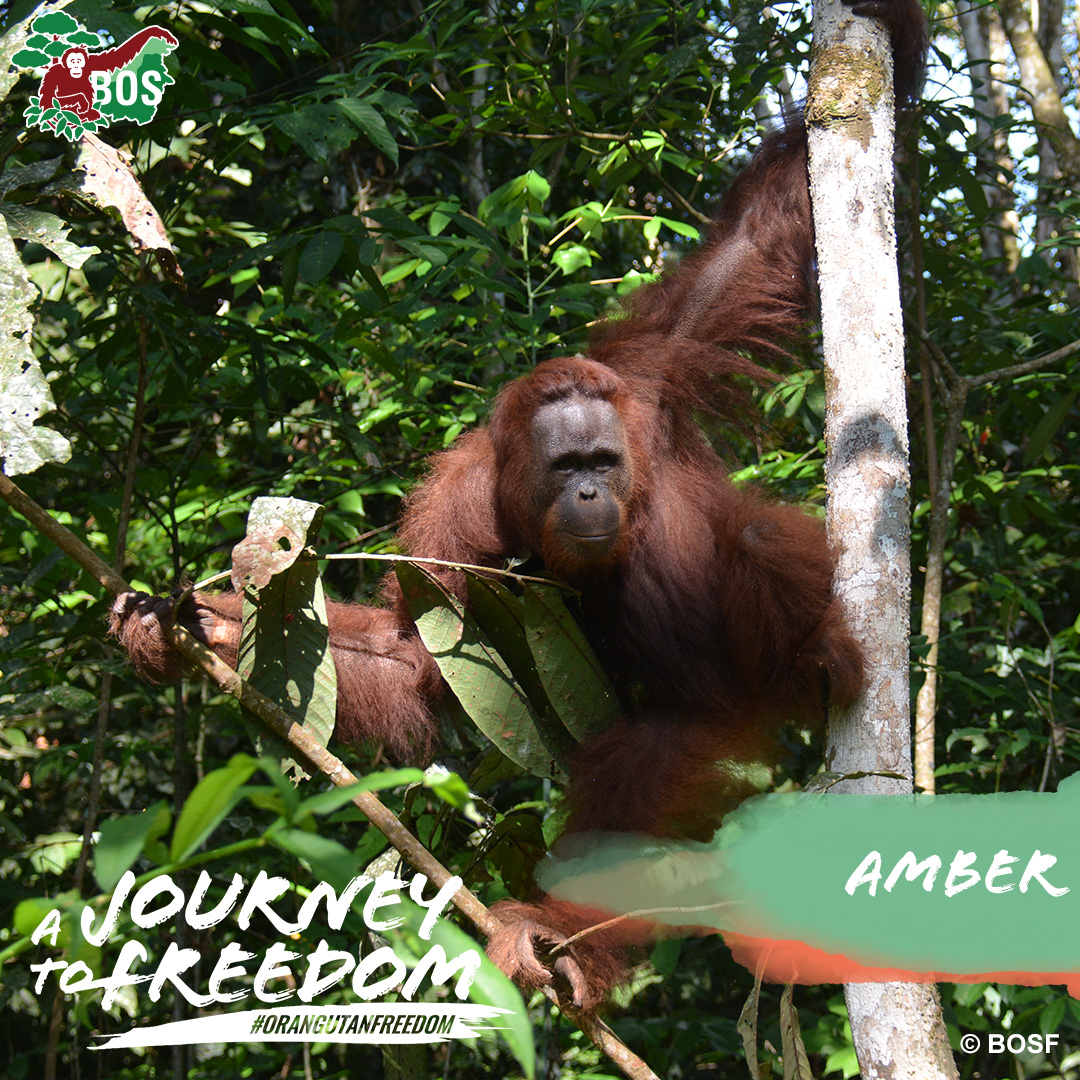 From the moment her cage was opened by the release team, Amber displayed aggressive behaviour, as though threatening to approach her observers. However, despite her threats, she ultimately chose to follow Reren.

Not far from where she was released, Amber was observed eating kondang fruits, sangkuang fruits, and capilak leaves. She stayed by Reren and even built her night nest adjacent to her! 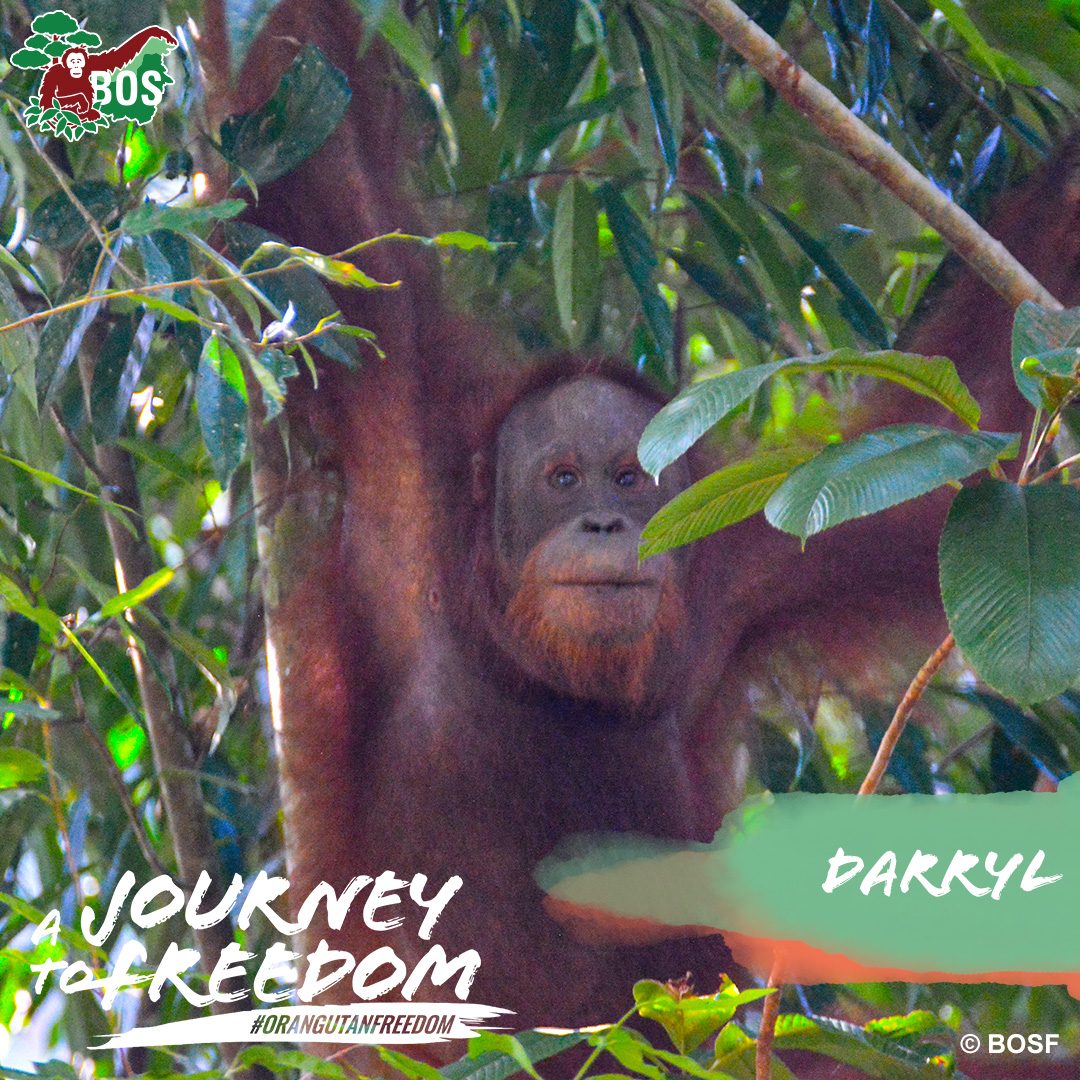 After his cage was opened, Darryl briefly checked his surroundings before climbing up a nearby tree. Once he reached the treetop, he immediately started to fill his stomach, apparently hungry after the long journey. The PRM team watched Darryl eat kapilak leaves, sangkuang leaves, and termites.

He was also seen socialising, wrestling, and playing chase with Randy for about half an hour. Finally, Darryl decided to build his night nest nearby his release point. 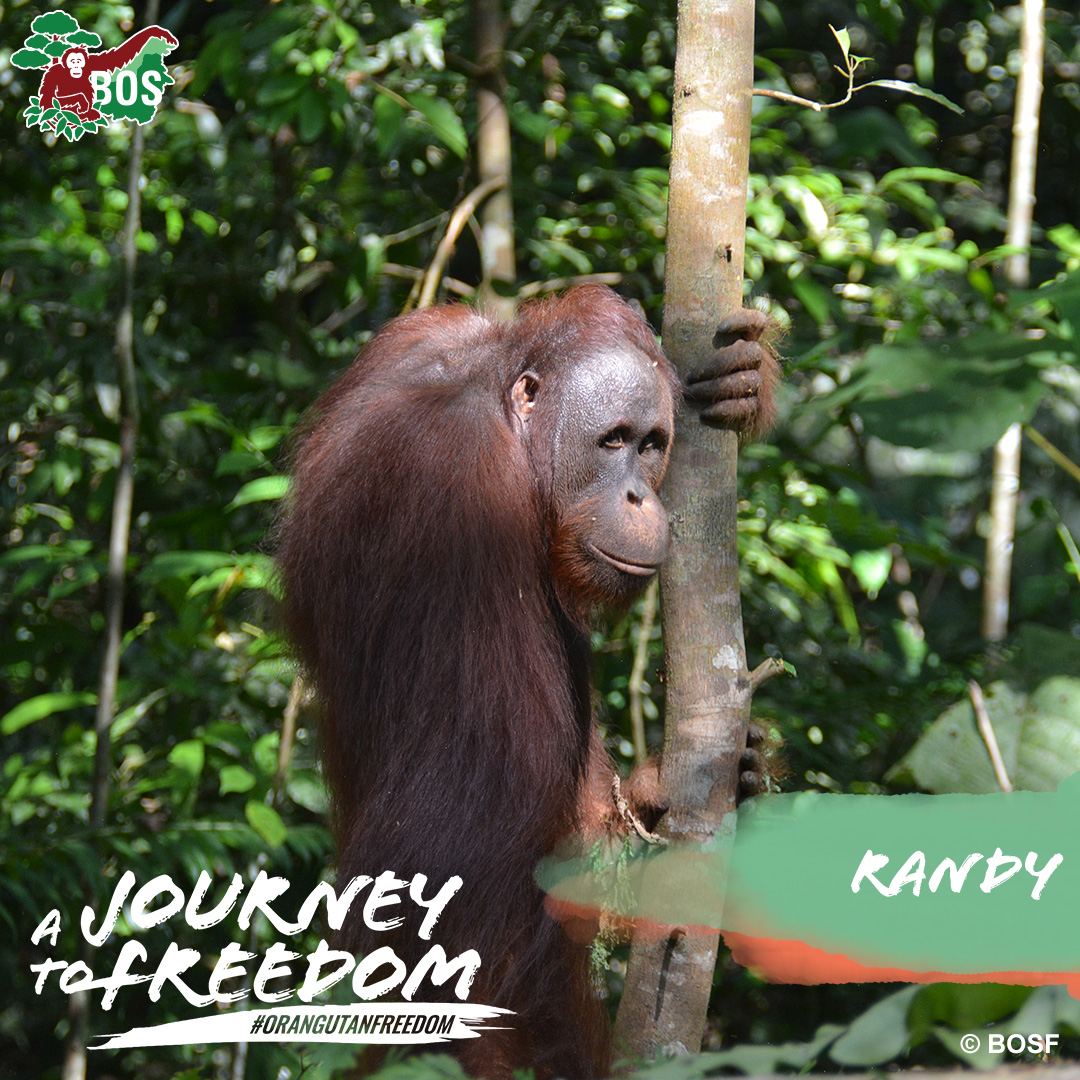 Randy showed his displeasure at human presence when his cage was opened. With his hair raised on end, he rushed up a tree, but then later calmed down. Randy seemed to be very content to be exploring his new environment and was seen eating a variety of natural foods, including kondang, figs, and gahung fruits. He was seen wrestling Darryl before making his night nest at about 200 metres from his release point.

Looking at the PRM team’s observation notes, it is clear that these newly-released orangutans possess excellent foraging abilities in the forest. We are confident that all seven will lead happy and prosperous lives in their new home, the Bukit Baka Bukit Raya National Park!

We’re thrilled to announce that the 37th  release mission from  Nyaru Menteng was successful! Here are some photos and video from the trip. Enjoy! 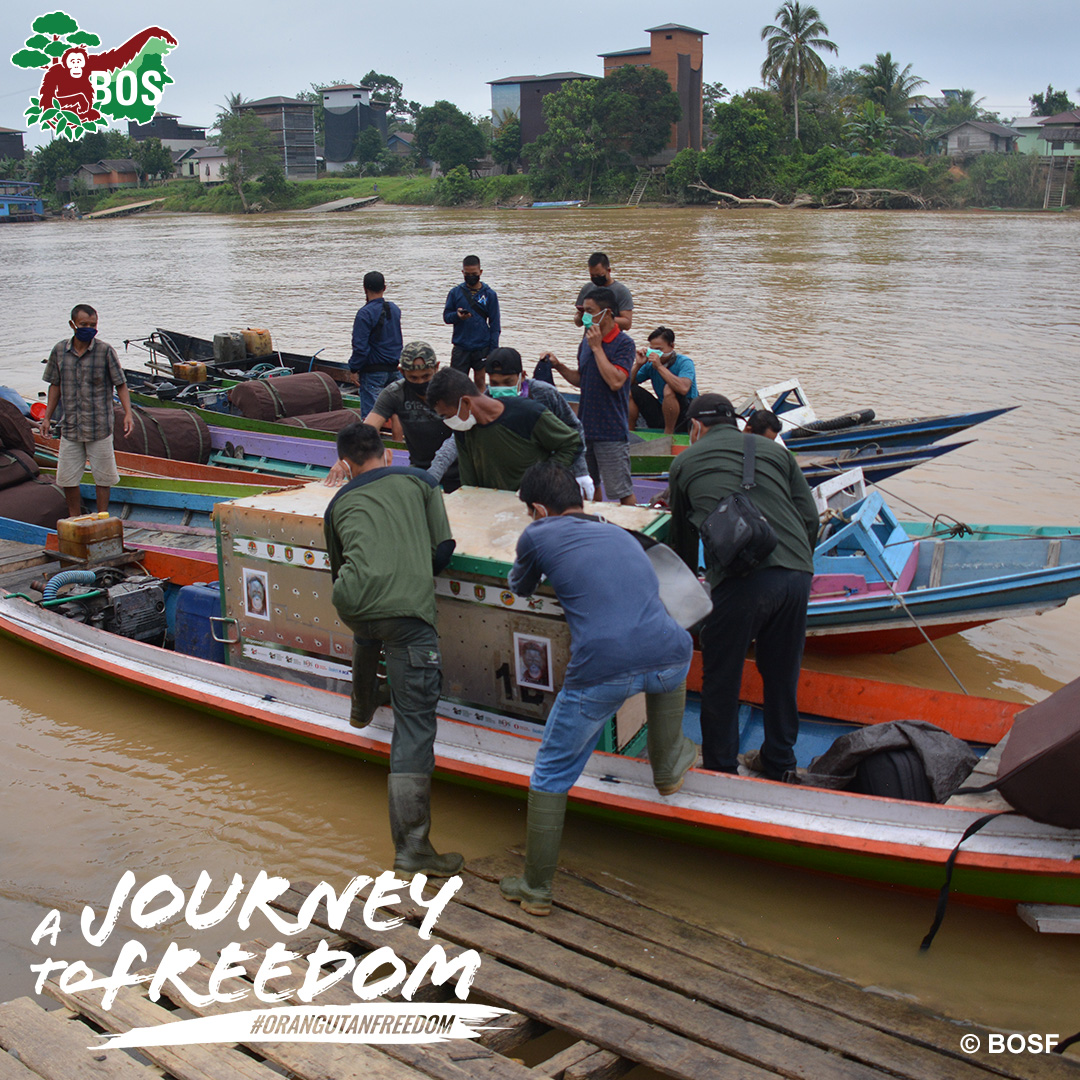 Heavy loading onto the boats, ensuring the orangutans’ absolute safety 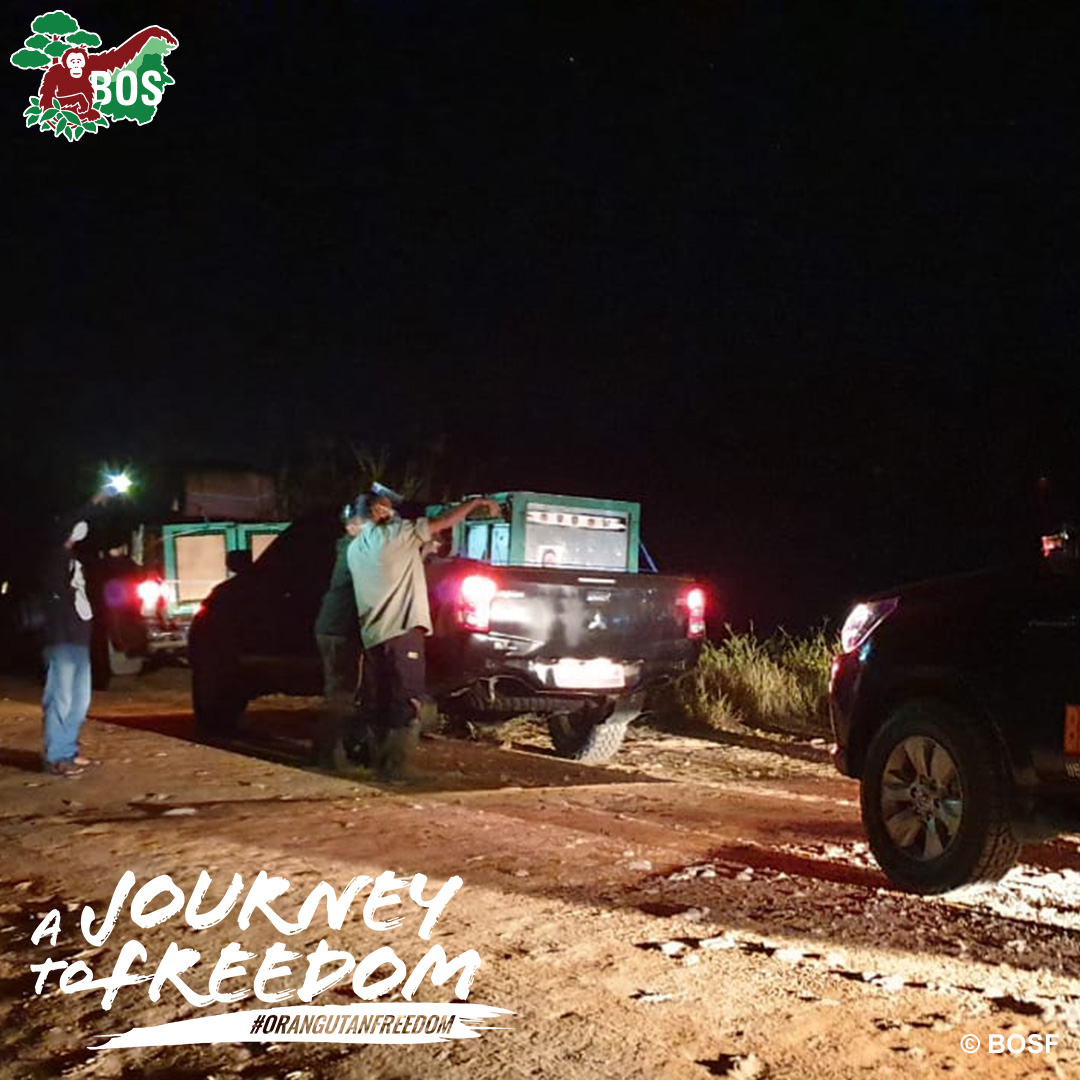 The team work tirelessly throughout the night

Finding forests suitable for releasing orangutans that have completed the rehabilitation process is not an easy task. These forests must meet strict criteria: they must be located below 900 meters above sea level, have sufficient stock of natural orangutan food sources, have a small wild orangutan population, and be safe from potential exploitation in the future.

Since 2016, the Borneo Orangutan Survival (BOS) Foundation has worked in collaboration with the Bukit Baka Bukit Raya National Park (TNBBBR) Office, the Central Kalimantan BKSDA, and USAID LESTARI to facilitate the release of rehabilitated orangutans into this prime orangutan habitat.